Monday April 30 / 15 Iyar
Nothing like starting a relaxing adventure by stressing out being ready on time! But somehow, we did it. We were ready to leave for Eilat at 8:00am. Too bad it took us a full half hour to load the van and run back for forgotten items. It's OK, we were still doing well. Today we were joined by Tami from Nof Tours. She's a sweet charaidi tour guide with her own van and a great sense of adventure. She claims I didn't drive her crazy, but I did write to her at least ten million times trying to figure out what we were doing. 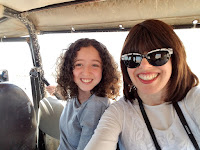 We started off with a jeep tour in the desert. It was an open window jeep. Rikki joined us for this part while Tami stayed with Huvi. The jeep went bumping all over. At first Rikki was enjoying it. After a little while she didn't find it as fun. Zahava told me she isn't going jeeping with me again. And Shauly found it a bit on the tame side. You know how it is  ... Two Jews / three opinions! Can't please everyone. 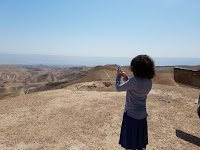 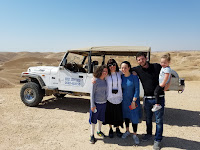 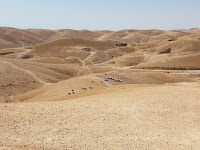 Rikki made the trip loads of fun. She didn't enjoy being strapped into a car seat. This smart little munchkin figured out that all she had to say was, I need to make, and like magic, we would stop and pull her out of the car seat. After the third time in like 30 minutes, we told her we weren't stopping anymore.

Finally made it down to Eilat (Hurray for sleeping kids!) We checked into our hotel, ate a little lunch and then headed out. We decided to do the Underwater Museum Observatory.

You go in this funny looking building, and go down a bunch of stairs. You end up before sea level. What's cool is you look right out into the ocean.

Then we went up. And up and up and other family members gave up, but I didn't. I climbed to the top of the tower. The view up there was fantastic. That little grey speck on the round part is Sheindy. You can also see Zahava with the carriage.

There were lots of other exhibits as well. What did Rikki enjoy the most? The little play area. Could have stayed home and taken her to the park there. Lol.
Dinner was at Café Café. And then, back to the hotel. Sheindy took a little dip in the pool that is right outside our patio. That is, until someone came by and said she isn't allowed in the pool at night when there is no life guard. Truthfully, it doesn't make much sense, since the life guard can't see a lot of the spots, like where we are. Oh well, the plan is for her to go swimming at 8am.
One cool side note - - I saw this bus today when Rikki had us stop at Ein Gedi. Notice the 414? That's what caught my eye. I figured it was a message for me, and it was  The first part says, He's always with you. 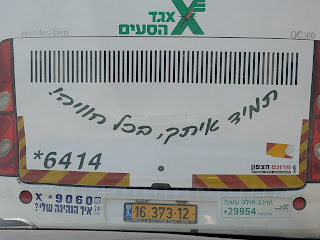 Posted by InMemoryOf Yossi at 6:42 PM