A FUN Sandwich Type of Day

When you want to criticize someone, you create a sandwich, compliment, critique, compliment. That was our day - - FANTASTIC, not fun, FANTASTIC.
We had some major adventures planned for today. We got up to the northern coast of Israel a little early, so we popped into the Tunisian Shul in Acco.

This was not a stop Sheindy enjoyed too much, but OK.
Next up was a total surprise. Sheindy had no idea we were doing this. I have no idea how we managed to keep it a secret. I found this tornado boat (basically a speed boat for a bunch of people) via Trip Advisory. They go close to Rosh Hanikra. I didn't want to take Sheindy to Rosh Hanikra, but I didn't want to skip it either. This solves that dilemma. 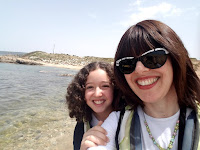 The boat ride was beyond amazing. After we settled in, we literally took off. We were zooming in the water, bouncing on top of the waves. 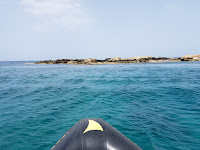 We were blasting right towards a small island and at the last second the boat was turned around. We stopped to take pictures and then we were off again. The next destination was to say HELLO to an IDF boat that guards the Israeli border near Lebanon.

Then we went a little closer to Rosh Hanikra. I wish we could have gone to the grottos, but I think it has to be arranged with the IDF to make sure it's safe. We then headed off towards a view of a gorgeous beach. Of course we didn't bring bathing gear. Oh well. That beach can be added to the next trip bucket list. 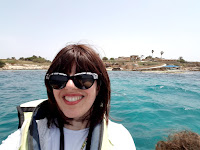 (Yes, I wore a shaitel. I had to hold onto it with one hand and the bar with the other hand. That left no hands for my cell phone, so I just sat on it!!!)
After this fantastic adventure  we headed up to Keshet Cave. We weren't planning on going into the cave, just a hike over the bridge. The hike starts at the top of a mountain, and you work your way down a little bit to the arch. 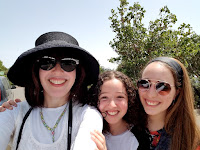 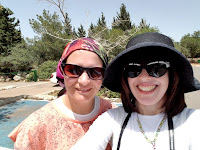 There was a group of IDF soldiers who were eating lunch. I said I wanted a picture with them. Zahava and Sheindy dared me to do it. I didn't need the dare because I was going to do it anyways. 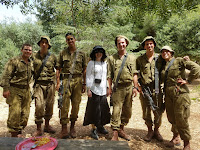 They were only too happy to take a picture with me. I made sure to bench them that Hashem should watch over them and keep them all safe.
I have to admit that I've been incredibly lazy the last few years, and I haven't been walking. Which made the hike super hard. Worst part is that this was the easy hike.

The view was gorgeous, so it was worth it. Next part was to go to this cool cave. Sheindy didn't want to do it, but I said we should. My idea of a cave is one you drive up to, walk in, look around and leave. This cave was a twenty minute hike in the hot sun over rocks on the side of a mountain.

To get into the cave, you have to crawl through a narrow opening. I was feeling light-headed and dizzy, but was pushing myself. I tried to talk Sheindy into doing it. She crawled through, saw a bug, and immediately fled back to the opening. Since I was beyond exhausted, I let her do it while everyone else continued on. My face was red as a tomato, and I had sweat dripping off me. Then we had to hike back to get to the car. I didn't enjoy this part of the trip. 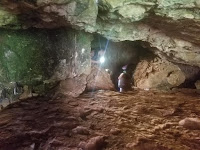 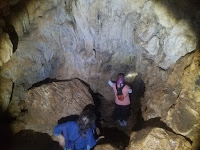 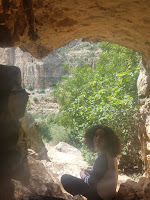 Since we were so overheated, we searched for a gas station to find some more water and ice cream. Yes. You can find cholov Yisroel ice cream in most gas stations in Israel! At this point, I was ready to head back, as was Sheindy. We were supposed to go horseback riding. In the end, Sheindy decided to do it. I was going to sit it out. Once we got there, I decided to do it. 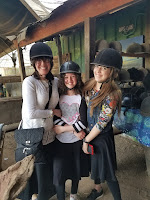 We literally rode off into the sunset. 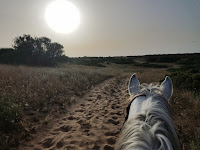 Our guide Adam claimed he didn't know English very well. However, he did do a superb job. We had so much fun. 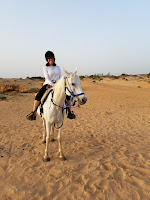 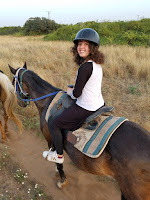 I had given him my cell phone to take pictures. He fell in love with it, since I have the camera set to voice activation. All you have to say is "Smile!" and it takes a picture. Once we got to the beach, he took tons of pictures of us. Then he wanted to get a shot with the three of us. Zahava's horse kept wanting to go over to Adam. So he would line the horse up, walk to take the picture, and Zahava's horse Don was walking towards him. It must have happened at least 5 times before we told him to let one of the other girls take a picture and he would be in the picture with the house. That worked. Too bad none of the pictures were good cuz he shot them into the sunset. Lol! 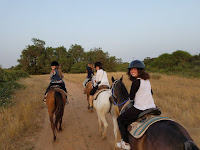 We then headed back to Yerushalayim. We stopped by Tommy's for dinner. Sheindy and I were supposed to go to the Migdal Dovid Light Show, but I was exhausted. I couldn't even take Sheindy out looking for bonfires. We did see one on the side of a hill on our way back, and that had to suffice. I couldn't even write my update. Just went to sleep without even changing my clothes!
Posted by InMemoryOf Yossi at 9:16 AM