Monday May 7 / 22 Iyar
The weather forecast had called for rain in the morning with clearing skies in the afternoon. The night before we decided to get a drop of a later start. Israeli hotels are different than American hotels in that most of offer breakfast (kosher) as part of your rate. There is a huge selection of various foods to choose from. This hotel did not disappoint. We loaded up our plates and started eating when the heavens opened up. 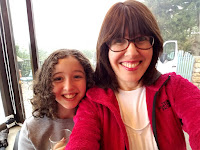 One by one we all made the bracha on thunder and lightening. The downpour was tremendous and we weren't going anywhere in it. Finally, at around 10:15, it started clearing. So we packed up, checked out, and headed on our way. Amidst much arguing, I pulled rank and said we were going to the old city of Tzafas. I had wanted to see the grave of the Arizal, who is buried there, so we stopped there first. On the way down to the grave you pass by his famed mikvah. 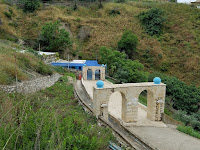 I said some tehillim while at his grave, as well as at the composer of Lecha Dodi, Rabbi Alkabetz. 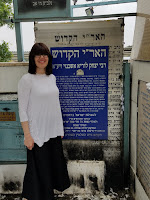 Tami likes to start at the famous Sefad Candle factory. Last time I came to Israel, we were so rushed. I honestly don't remember seeing any of the totally mind blowing creations there. 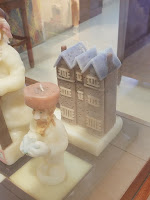 There is a chess set loaded with symbolism, as well as the most darling Noah's ark. The tevah had such cute animals, such as Grommet, Snoopy, Winnie the Pooh, Madagascar, etc. 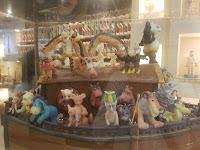 Sheindy and Zahava both made a twisted candle like a havdalah candle. 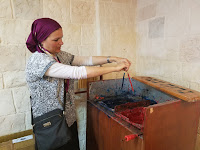 Now the real adventure started. Last time I was here there was a female artist who had the most stunning picture of the Rebbe. For two years, I've kicked myself for not buying it. I wanted to find her and see if she still had it. Tami showed us some other little hidden treasures along the way of my search. We saw how people weave with a loom. We were also treated to a gorgeous look out from the top of a building. I had almost given up hope of finding the artist when lo and behold, there she is! Sadly, she no longer had the picture I wanted. I spent a long time looking at her work, because I really wanted to bring something nice back, a real piece of Israel. There wasn't anything I really loved except for this huge picture. So we left in search of what else there was. Nothing really spoke to me, screaming, this is it! There were several interesting shop keepers, like the guy who yelled at us to get away; the guy who didn't seem us worthy of his attention, and the woman who walked away when I wanted to make a purchase. I didn't care, as my money walked away with me when I left their stall. It was their loss, not mine.
So I stopped back at the lady artist. When I had explained what I wanted earlier, she had remembered me. She said she normally doesn't push, but she saw how much I had wanted it, which is why she pushed that time. We went back and forth on what I liked, but I was still drawn to that huge picture. Zahava kept saying I could take it on the plane with me, but I wasn't even sure where I was going to put such a large picture. She then told me she could make me a slightly smaller one and ship it to me. So even though the end cost would be the same as purchasing the much larger one, the ease of not dealing with it on the plane totally won out.
Shockingly, it was almost 2 when we left. For a place people didn't want to go, we had spent an awfully long time. We needed to cut our agenda, so I had Tami drop a hike I was very interested in. It was pretty much my fault we had spent such a long time there.
We were going to go to Menara Cliff, but several bus loads of kids pulled up. We didn't want to wait 45 mins for a 7 minute ride, so we left.
Sheindy said she was really hungry, and we spotted a Cafe Cafe. When we pulled into the mall parking lot, we saw a kosher l'mehadrin Pizza Hut there.

So pizza it was  Again. (I never want to see pizza again, since we've had it so many times.)
With full bellies, we headed to a water hike. Israel is a land full of stunning trails, some of which are in water. This particular one is not super long, nor is it very hard. We changed into some water gear, and headed off on our adventure. The park was basically empty, with only a couple of other cars there. In truth, we didn't really see anyone else on the trail. It starts off easy enough as you mosey on down the path. Then it sorta ends in this delightful brook. Seems easy enough, right? It really isn't if you are carrying a phone to take pictures with and don't have one hand to balance and you are walking on rocks with some slime on them. I'll give you one guess who mywas the first to fall! Said person proudly held their hand high to prevent their phone from getting wet, although I can't say the same for the rest of her. 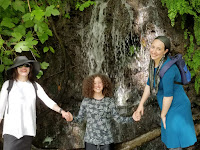 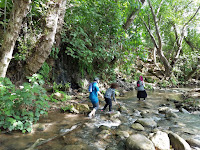 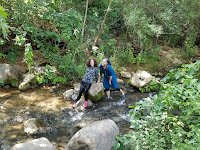 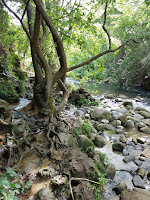 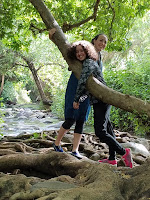 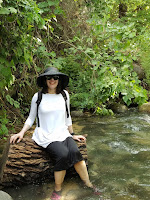 The scenery was absolutely beautiful. The leaves were a lovely spring green, and the overgrowth provided the exact amount of shade we needed. Sheindy and Zahava were really enjoying themselves. Tami and I went a little slower. Tami was slow only to make sure I didn't tumble again, since I wasn't able to balance myself so well.
At the end of the trail, we made a decision to go banana boating, since we had cut it out the day before.
We headed down to Teveria. We were in Kiryat Shemona, which is a Northernmost city in Israel. The area for banana boating is right near Aqua Kef. Sheindy wanted to go back, but it was too close to closing. So we went to the docks. The weather was a little cooler, and I really didn't want to get completely wet. There is a good chance of falling off the banana boat, so we went with a carousela boat. Tami had shown me a video the night before and it looked fun.
Zahava was concerned it would be too tame. Tami told me not to wear my shaitel, so I had my ugly bathing cap on. We climbed into this giant round inflated couch, and the speed boat pulled us out of the dock. 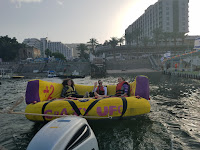 It seemed pretty tame until we got fat enough out into Lake Kinneret. Then the boat driver threw out the extra roap and put the boat into high gear. Three words .... Oh. My. Gosh!!!! I think a screw must have fallen out (of me) when I tumbled in the water, because this was just insane! I've gotten a little more tame over the years, but I still enjoy a good thrill. This was slightly beyond that. Zahava and Sheindy were sitting on the sides, with me in the middle. Sheindy is so light that each bounce sent her flying. The boat is zipping around in the water creating small waves, which our raft was bouncing over. Soon, it got to be too much, and Sheindy was really scared. She was bouncing pretty high. I had her move over next to me, and I held onto the strap on her other side, in affect, creating a seat belt with my arm. We took off again, bouncing and flying over the Kinneret. I do have to admit that I was more than happy when it was over. I think I'm getting too old for there things! The guy was super nice and told us we can take pictures in any of the boats. 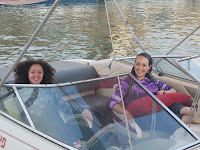 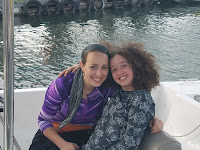 As we were leaving, we saw these little mechanical cars. The very cars that Sheindy has been asking us to buy get for years. Since she is small, she was able to rent one. She drove up and down the pier. Tami raced her ... And won. The little car doesn't go very fast. That didn't bother her in the least, she throughly loved every second of it. 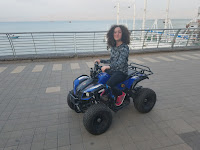 And with that last little adventure, it was time to bid farewell to Northern Israel and head back to Yerushalayim.
Posted by InMemoryOf Yossi at 5:39 PM